During week 10 (March 5-11, 2017), influenza activity decreased, but remained elevated in the United States.

The World Health Organization (WHO) has recommended vaccine viruses for the 2017-2018 influenza season Northern Hemisphere vaccine composition, and the Food and Drug Administration's Vaccines and Related Biological Products Advisory Committee (VRBPAC) has made the vaccine composition recommendation to be used in the United States. Both agencies recommend that trivalent vaccines contain an A/Michigan/45/2015 (H1N1)pdm09-like virus, an A/Hong Kong/4801/2014 (H3N2)-like virus, and a B/Brisbane/60/2008-like (B/Victoria lineage) virus. It is recommended that quadrivalent vaccines, which have two influenza B viruses, contain the viruses recommended for the trivalent vaccines, as well as a B/Phuket/3073/2013-like (B/Yamagata lineage) virus. This represents a change in the influenza A (H1N1) component compared with the composition of the 2016-2017 influenza vaccine. The vaccine viruses recommended for inclusion in the 2017-2018 Northern Hemisphere influenza vaccines are the same vaccine viruses that were chosen for inclusion in 2017 Southern Hemisphere seasonal flu vaccines. These vaccine recommendations were based on several factors, including global influenza virologic and epidemiologic surveillance, genetic characterization, antigenic characterization, antiviral resistance, and the candidate vaccine viruses that are available for production.

Based on National Center for Health Statistics (NCHS) mortality surveillance data available on March 16, 2017, 8 % of the deaths occurring during the week ending February 25, 2017 (week 8) were due to P&I. This percentage is above the epidemic threshold of 7,5 % for week 8.

Background: Weekly mortality surveillance data include a combination of machine coded and manually coded causes of death collected from death certificates. There is a backlog of data requiring manual coding within NCHS mortality surveillance data. The percentages of deaths due to P&I are higher among manually coded records than more rapidly available machine coded records and may result in initially reported P&I percentages that are lower than percentages calculated from final data. Efforts continue to reduce and monitor the number of records awaiting manual coding.

A total of 53 influenza-associated pediatric deaths have been reported for the 2016-2017 season.

Nationwide during week 10, 3,7 % of patient visits reported through the U.S. Outpatient Influenza-like Illness Surveillance Network (ILINet) were due to influenza-like illness (ILI). This percentage is above the national baseline of 2,2 %. (ILI is defined as fever (temperature of 100°F [37.8°C] or greater) and cough and/or sore throat.)

During week 10, the following ILI activity levels were experienced:

*This map uses the proportion of outpatient visits to health care providers for ILI to measure the ILI activity level within a state. It does not, however, measure the extent of geographic spread of flu within a state. Therefore, outbreaks occurring in a single city could cause the state to display high activity levels.
Data collected in ILINet may disproportionally represent certain populations within a state, and therefore, may not accurately depict the full picture of influenza activity for the whole state.
Data displayed in this map are based on data collected in ILINet, whereas the State and Territorial flu activity map is based on reports from state and territorial epidemiologists. The data presented in this map are preliminary and may change as more data are received.
Differences in the data presented here by CDC and independently by some state health departments likely represent differing levels of data completeness with data presented by the state likely being the more complete.

During week 10, the following influenza activity was reported: 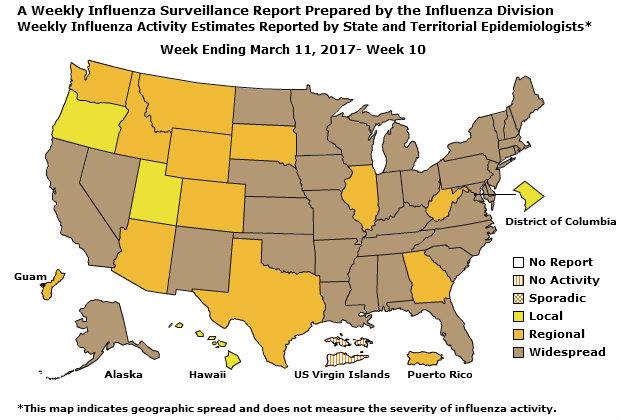