Yamagata Lineage [44]: All 44 (100 %) B/Yamagata-lineage viruses were antigenically characterized as B/Phuket/3073/2013-like, which is included as an influenza B component of the 2015-2016 Northern Hemisphere trivalent and quadrivalent influenza vaccines.

The eight influenza A (H3N2) viruses collected since October 1, 2015 have been genetically sequenced and all viruses belonged to genetic groups for which a majority of viruses antigenically characterized were similar to A/Switzerland/9715293/2013, the influenza A (H3N2) component of the 2015-2016 Northern Hemisphere vaccine. Six viruses (one A (H1N1)pdm09, four A (H3N2), and one B/Yamagata-lineage) collected since October 1, 2015 have been antigenically characterized. All six were similar to the 2015-2016 Northern Hemisphere influenza vaccine components.

During week 44, 5,7 % of all deaths reported through the 122 Cities Mortality Reporting System were due to P&I. This percentage was below the epidemic threshold of 6,2 % for week 44.

No influenza-associated pediatric deaths were reported to CDC during week 44.

Nationwide during week 44, 1,4 % of patient visits reported through the U.S. Outpatient Influenza-like Illness Surveillance Network (ILINet) were due to influenza-like illness (ILI). This percentage is below the national baseline of 2,1 %.

During week 44, the following ILI activity levels were calculated:

During week 44, the following influenza activity was reported: 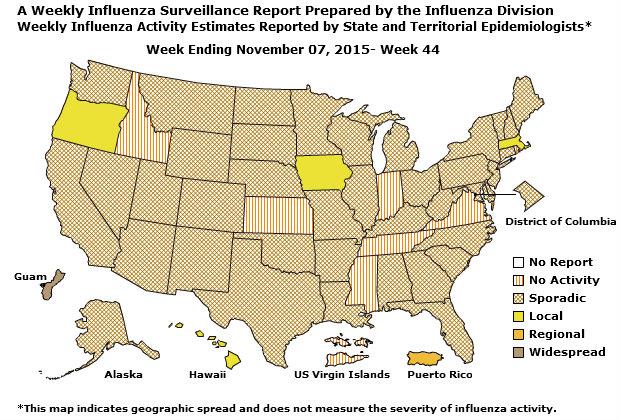