One human infection with a novel influenza A virus was reported by the state of Minnesota. The person was infected with an influenza A (H1N2) variant* (H1N2v) virus. The patient was hospitalized as a result of their illness, but has fully recovered. An investigation is ongoing into the source of the patient's infection and to determine if there are other epidemiologically-linked cases of H1N2v virus infection.

Early identification and investigation of human infections with novel influenza A viruses are critical so that the risk of infection can be more fully appreciated and appropriate public health measures can be taken. Additional information on influenza in swine, variant influenza infection in humans, and strategies to interact safely with swine can be found at http://www.cdc.gov/flu/swineflu/index.htm.

CDC characterizes influenza viruses through one or more tests including genome sequencing, hemagglutination inhibition (HI) and/or neutralization assays. These data are used to compare how similar currently circulating influenza viruses are to the reference viruses used for developing influenza vaccines, and to monitor for changes in circulating influenza viruses. Historically, HI data have been used most commonly to assess the similarity between reference viruses and circulating viruses to suggest how well the vaccine may work until such time as vaccine effectiviness estimates are available. During the 2014-2015 season and to date, however, a portion of influenza A (H3N2) viruses do not yield sufficient hemagglutination titers for antigenic characterization by HI. For many of these viruses, CDC performs genetic characterization to determine the genetic group identity of those viruses. In this way, antigenic properties of these viruses can be inferred from viruses within the same genetic group that have been characterized antigenically.

The World Health Organization (WHO) has recommended vaccine viruses for the 2016-2017 influenza season Northern Hemisphere vaccine composition, and the Food and Drug Administration's Vaccines and Related Biological Products Advisory Committee (VRBPAC) has made the vaccine composition recommendation to be used in the United States. Both agencies recommend that trivalent vaccines contain an A/California/7/2009 (H1N1)pdm09-like virus, an A/Hong Kong/4801/2014 (H3N2)-like virus, and a B/Brisbane/60/2008-like (B/Victoria lineage) virus. It is recommended that quadrivalent vaccines, which have two influenza B viruses, contain the viruses recommended for the trivalent vaccines, as well as a B/Phuket/3073/2013-like (B/Yamagata lineage) virus. This represents a change in the influenza A (H3) component and a change in the influenza B lineage included in the trivalent vaccine compared with the composition of the 2015-2016 influenza vaccine. The vaccine viruses recommended for inclusion in the 2016-2017 Northern Hemisphere influenza vaccines are the same vaccine viruses that were chosen for inclusion in 2016 Southern Hemisphere seasonal flu vaccines. These vaccine recommendations were based on several factors, including global influenza virologic and epidemiologic surveillance, genetic characterization, antigenic characterization, antiviral resistance, and the candidate vaccine viruses that are available for production.

The majority of recently circulating influenza viruses are susceptible to the neuraminidase inhibitor antiviral medications, oseltamivir, zanamivir, and peramivir; however, rare sporadic instances of oseltamivir-resistant and peramivir-resistant influenza A (H1N1)pdm09 viruses and oseltamivir-resistant influenza A (H3N2) viruses have been detected worldwide. Antiviral treatment as early as possible is recommended for patients with confirmed or suspected influenza who have severe, complicated, or progressive illness; who require hospitalization; or who are at high risk. for serious influenza-related complications. Additional information on recommendations for treatment and chemoprophylaxis of influenza virus infection with antiviral agents is available at http://www.cdc.gov/flu/antivirals/index.htm.

During week 18, 6,7 % of all deaths reported through the 122 Cities Mortality Reporting System were due to P&I. This percentage was below the epidemic threshold of 6,8 % for week 18.

Nationwide during week 18, 1,8 % of patient visits reported through the U.S. Outpatient Influenza-like Illness Surveillance Network (ILINet) were due to influenza-like illness (ILI). This percentage is below the national baseline of 2,1 %. (ILI is defined as fever (temperature of 100°F [37.8°C] or greater) and cough and/or sore throat.)

The increase in the percentage of patient visits for ILI in weeks 51 and 52 (the weeks ending December 26, 2015 and January 2, 2016) may have been influenced in part by a reduction in routine healthcare visits during the holidays, as has occurred in previous seasons.

During week 18, the following ILI activity levels were calculated:

During week 18, the following influenza activity was reported: 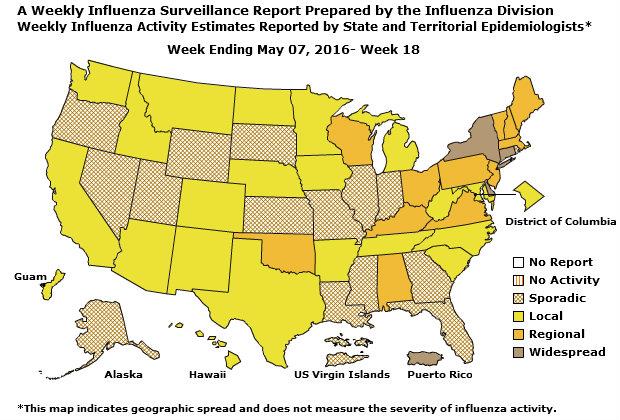