Based on NCHS mortality surveillance data available on February 4, 2016, 7 % of the deaths occurring during the week ending January 16, 2016 (week 2) were due to P&I. This percentage is below the epidemic threshold of 7,6 % for week 2.

During week 4, 6,8 % of all deaths reported through the 122 Cities Mortality Reporting System were due to P&I. This percentage was below the epidemic threshold of 7,2 % for week 4.

Nationwide during week 4, 2,2 % of patient visits reported through the U.S. Outpatient Influenza-like Illness Surveillance Network (ILINet) were due to influenza-like illness (ILI). This percentage is above the national baseline of 2,1 %. (ILI is defined as fever (temperature of 100°F [37.8°C] or greater) and cough and/or sore throat.)

The increase in the percentage of patient visits for ILI in weeks 51 and 52 (the weeks ending December 26, 2015 and January 2, 2016) may be influenced in part by a reduction in routine healthcare visits during the holidays, as has occurred in previous seasons.

During week 4, the following ILI activity levels were calculated:

During week 4, the following influenza activity was reported: 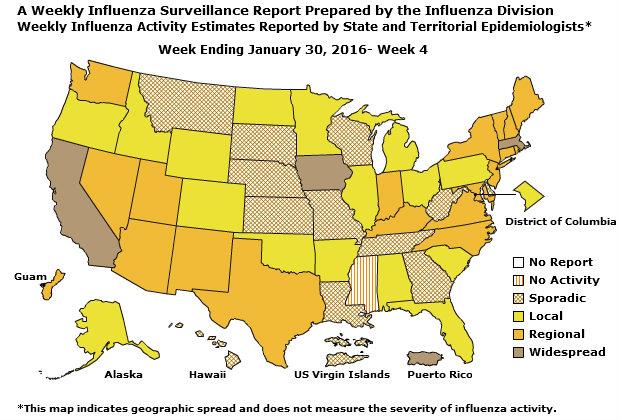