During week 49 (November 30-December 6, 2014), influenza activity continued to increase in the United States.

During week 49, 6 % of all deaths reported through the 122 Cities Mortality Reporting System were due to P&I. This percentage was below the epidemic threshold of 6.6 % for week 49.

To date, seven influenza-associated pediatric deaths have been reported for the 2014-2015 season.

Clinical findings are preliminary and based on 174 (17 %) cases with complete medical chart abstraction. The majority (95 %) of hospitalized adults had at least one reported underlying medical condition; the most commonly reported were metabolic disorders, obesity, and cardiovascular disease. There were 27 hospitalized children with complete medical chart abstraction, 15 (56 %) had no identified underlying medical conditions. Among the 17 hospitalized women of childbearing age (15-44 years), seven were pregnant.

Nationwide during week 49, 2,5 % of patient visits reported through the U.S. Outpatient Influenza-like Illness Surveillance Network (ILINet) were due to influenza-like illness (ILI). This percentage is above the national baseline of 2 %.

During week 49, the following ILI activity levels were experienced:

During week 49, the following influenza activity was reported: 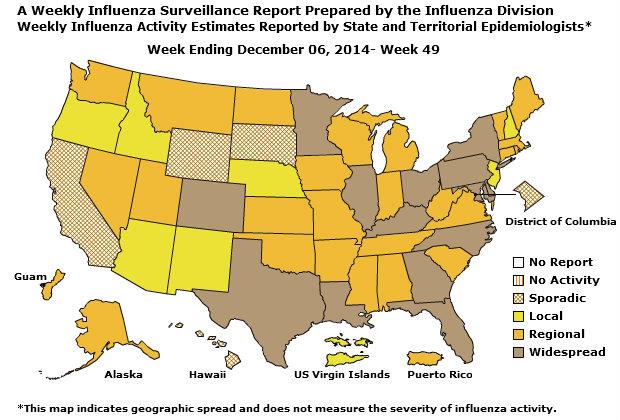