CDC previously reported that 49 % of H3N2 viruses collected worldwide from May 18-September 20, 2014 were antigenically similar to A/Texas/50/2012 ("Update: Influenza Activity – United States and Worldwide, May 18-September 20, 2013" in the MMWR) and 42 % of viruses collected in the United States during that time were antigenically similar to A/Texas/50/2012 (FluView Week 40). CDC conducts antigenic characterization of influenza viruses year-round to compare how similar currently circulating influenza viruses are to those included in the influenza vaccine, and to monitor for changes in circulating influenza viruses.

Testing of 2009 H1N1, influenza A (H3N2), and influenza B virus isolates for resistance to neuraminidase inhibitors (oseltamivir and zanamivir) is performed at CDC using a functional assay. Additional 2009 H1N1 and influenza A (H3N2) clinical samples are tested for mutations of the virus known to confer oseltamivir resistance. The data summarized below combine the results of both testing methods. These samples are routinely obtained for surveillance purposes rather than for diagnostic testing of patients suspected to be infected with antiviral-resistant virus.


The majority of recently circulating influenza viruses have been susceptible to the neuraminidase inhibitor antiviral medications, oseltamivir and zanamivir; however, rare sporadic instances of oseltamivir-resistant 2009 H1N1 and A (H3N2) viruses have been detected worldwide. Antiviral treatment with oseltamivir or zanamivir is recommended as early as possible for patients with confirmed or suspected influenza who have severe, complicated, or progressive illness; who require hospitalization; or who are at high risk for serious influenza-related complications. Additional information on recommendations for treatment and chemoprophylaxis of influenza virus infection with antiviral agents is available at http://www.cdc.gov/flu/antivirals/index.htm.

During week 44, 5,7 % of all deaths reported through the 122 Cities Mortality Reporting System were due to P&I. This percentage was below the epidemic threshold of 6,2 % for week 44.

Nationwide during week 44, 1,5 % of patient visits reported through the U.S. Outpatient Influenza-like Illness Surveillance Network (ILINet) were due to influenza-like illness (ILI). This percentage is below the national baseline of 2 %.

During week 44, the following ILI activity levels were experienced:

During week 44, the following influenza activity was reported: 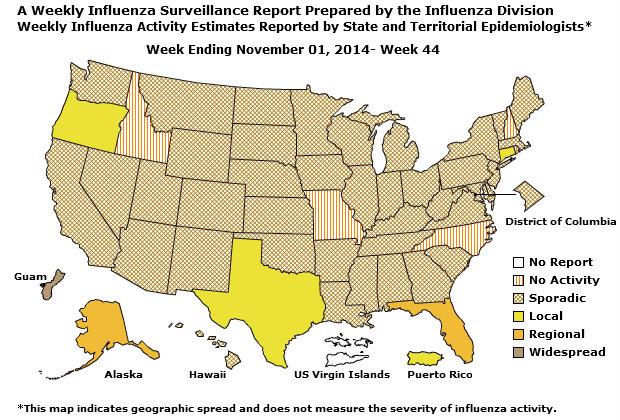