One human infection with a novel influenza A virus was reported by Wisconsin. The person was infected with an influenza A (H3N2) variant (H3N2v) virus, and has completely recovered from their illness. No ongoing human-to-human transmission has been identified and the case patient reported close contact with swine in the week prior to illness onset. This is the first H3N2v infection reported for the 2014-2015 influenza season, which began on September 28, 2014.

Early identification and investigation of human infections with novel influenza A viruses is critical in order to evaluate the extent of the outbreak and possible human-to-human transmission. Additional information on influenza in swine, variant influenza infection in humans, and strategies to interact safely with swine can be found at http://www.cdc.gov/flu/swineflu/h3n2v-case-count.htm.

No antigenic characterization data is available for specimens collected after October 1, 2014.

No antiviral resistance data is available for specimens collected after October 1, 2014.

The majority of currently circulating influenza viruses are susceptible to the neuraminidase inhibitor antiviral medications, oseltamivir and zanamivir; however, rare sporadic instances of oseltamivir-resistant 2009 H1N1 and A (H3N2) viruses have been detected worldwide. Antiviral treatment with oseltamivir or zanamivir is recommended as early as possible for patients with confirmed or suspected influenza who have severe, complicated, or progressive illness; who require hospitalization; or who are at high risk for serious influenza-related complications. Additional information on recommendations for treatment and chemoprophylaxis of influenza virus infection with antiviral agents is available at http://www.cdc.gov/flu/antivirals/index.htm.

During week 42, 5,3 % of all deaths reported through the 122 Cities Mortality Reporting System were due to P&I. This percentage was below the epidemic threshold of 6 % for week 42.


For the 2014-2015 influenza season, CDC/Influenza Division and the National Center for Health Statistics (NCHS) are collaborating on a pilot project to use NCHS mortality surveillance data for the rapid assessment of pneumonia and influenza (P&I) mortality. To view the data, please click here (http://www.cdc.gov/flu/weekly/nchs.htm).

One death was associated with an influenza B virus and occurred during the 2013-2014 season and brings the total number of reported pediatric deaths occurring during that season to 109.

Nationwide during week 42, 1,4 % of patient visits reported through the U.S. Outpatient Influenza-like Illness Surveillance Network (ILINet) were due to influenza-like illness (ILI). This percentage is below the national baseline of 2 %.

On a regional level, the percentage of outpatient visits for ILI ranged from 0,7 % to 2,8 % during week 42. One region reported ILI above their region-specific baseline level.

During week 42, the following ILI activity levels were experienced:

During week 42, the following influenza activity was reported: 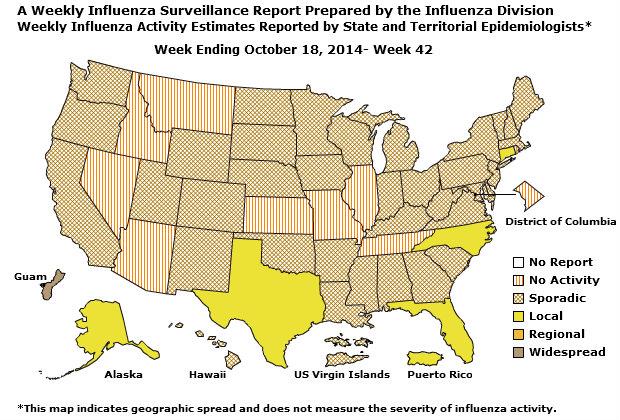