During week 33 (August 16-22, 2009), influenza activity remained stable or continued to decline in most areas of the U.S. However, activity appears to be increasing in the Southeast.
A total of 8Â 843 hospitalizations and 556 deaths associated with 2009 influenza A (H1N1) viruses have been reported to CDC an increase from 7Â 983 hospitalizations and 522 deaths from the prior week

The unusually high percentage of specimens testing positive for influenza by WHO and NREVSS collaborating laboratories remained higher during week 33 than is typically seen this time of year, and may be due to a combination of factors including higher than normal circulation of influenza in the summer with the emergence of the 2009 H1N1 virus, changes in testing practices by health care providers, triaging of specimens by public health laboratories, an increase in the number of specimens collected from outbreaks, and other factors.

Influenza B viruses currently circulating can be divided into two distinct lineages represented by the B/Yamagata/16/88 and B/Victoria/02/87 viruses. Seventy-six (11Â %) of 694 influenza B viruses tested belong to the B/Yamagata lineage and are related to the vaccine strain (B/Florida/04/2006). The remaining 618 (89Â %) viruses belong to the B/Victoria lineage and are not related to the vaccine strain.

Six of the seven patients had documented exposure to oseltamivir through either treatment or chemoprophylaxis, and the remaining patient is currently under investigation to determine exposure to oseltamivir. Occasssional development of oseltamivir resistance during treatment or prophylaxis is not unexpected. Enhanced surveillance is expected to detect additional cases of oseltamivir resistant 2009 influenza A (H1N1) viruses and such cases will be investigated to assess the spread of resistant strains in the community. To prevent the spread of antiviral resistant virus strains, CDC reminds clinicians and the public of the need to continue hand and cough hygiene measures for the duration of any symptoms of influenza
(http://www.cdc.gov/mmwr/preview/mmwrhtml/mm5832a3.htm)

During week 33, 6,1Â % of all deaths reported through the 122-Cities Mortality Reporting System were due to P&I. This percentage was below the epidemic threshold of 6,3Â % for week 33.

Five influenza-associated pediatric deaths were reported to CDC during week 33 (California [2], Georgia, Illinois, and Texas).  These deaths were associated with 2009 influenza A (H1N1) virus infection.  The deaths reported this week occurred between June 7 and August 15, 2009.  Since September 28, 2008, CDC has received 110 reports of influenza-associated pediatric deaths that occurred during the current influenza season, 42 of which were due to 2009 influenza A (H1N1) virus infections.

During April 15, 2009 to August 22, 2009, the following preliminary laboratory-confirmed overall influenza associated hospitalization rates were reported by the EIP (rates include type A, type B, and 2009 H1N1):

Nationwide during week 33, 1,4Â % of patient visits reported through the U.S. Outpatient Influenza-like Illness Surveillance Network (ILINet) were due to influenza-like illness (ILI). This percentage is below the national baseline of 2,4Â %..

During week 33, the following influenza activity was reported: 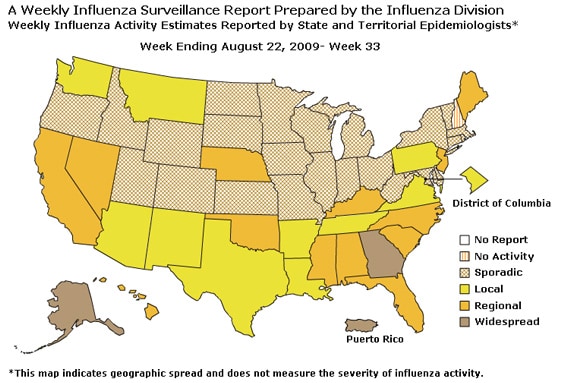