On June 11, the World Health Organization raised the pandemic alert level from Phase 5 to Phase 6 indicating that an influenza pandemic is underway.

During week 28 (July 12-18, 2009), influenza activity decreased in the United States; however, there were still higher levels of influenza-like illness than is normal for this time of year.

Influenza B viruses currently circulating can be divided into two distinct lineages represented by the B/Yamagata/16/88 and B/Victoria/02/87 viruses. Seventy-two (12Â %) of 624 influenza B viruses tested belong to the B/Yamagata lineage and are related to the vaccine strain (B/Florida/04/2006). The remaining 552 (88Â %) viruses belong to the B/Victoria lineage and are not related to the vaccine strain.

Annual influenza vaccination is expected to provide the best protection against those virus strains that are related to the vaccine strains, but limited to no protection may be expected when the vaccine and circulating virus strains are so different as to be from different lineages, as is seen with the two lineages of influenza B viruses. Antigenic characterization of novel influenza A (H1N1) viruses indicates that these viruses are antigenically and genetically unrelated to seasonal influenza A (H1N1) viruses, suggesting that little to no protection would be expected from vaccination with seasonal influenza vaccine.

The novel influenza A (H1N1) virus is susceptible to both neuraminidase inhibitor antiviral medications zanamivir and oseltamivir. It is resistant to the adamantane antiviral medications, amantadine and rimantadine. Antiviral treatment with either oseltamivir or zanamivir is recommended for all patients with confirmed, probable or suspected cases of novel influenza A (H1N1) virus infection who are hospitalized or who are at higher risk for seasonal influenza complications.

During week 28, 6,7Â % of all deaths reported through the 122-Cities Mortality Reporting System were due to P&I. This percentage was above the epidemic threshold of 6,5Â % for week 28.

Five influenza-associated pediatric deaths were reported to CDC during week 28 (Minnesota, New York [3], and Virginia). Four of these deaths were associated with a novel influenza A (H1N1) virus infection, and one was associated with an influenza B virus. The deaths reported this week occurred during weeks 8-27 (the weeks ending February 27-July 7, 2009). Since September 28, 2008, CDC has received 95 reports of influenza-associated pediatric deaths that occurred during the current influenza season, 27 of which were due to novel influenza A (H1N1) virus infections.

Of the 42 children who had specimens collected for bacterial culture from normally sterile sites, 17 (40,5Â %) were positive; Staphylococcus aureus was identified in 10 (58,8Â %) of the 17 children. Four of the S. aureus isolates were sensitive to methicillin and six were methicillin resistant. Fourteen (82,4Â %) of the 17 children with bacterial coinfections were five years of age or older and 10 (58,8Â %) of the 17 children were 12 years of age or older. Eleven of the 27 children with confirmed novel influenza A (H1N1) infection had a specimen collected from a normally sterile site; three of the 11 children had a positive bacterial culture. An increase in the number of influenza-associated pediatric deaths with bacterial coinfections was first recognized during the 2006-07 influenza season. In January 2008, interim testing and reporting recommendations were released regarding influenza and bacterial coinfections in children and are available at (http://www2a.cdc.gov/HAN/ArchiveSys/ViewMsgV.asp?AlertNum=00268).

Data collection for influenza-associated hospitalizations through the NVSN has been completed for the 2008-09 influenza season. There will be no updates to this system after week 28.

During April 15, 2009 to July 18, 2009, the following preliminary laboratory-confirmed overall influenza associated hospitalization rates were reported by the EIP (rates include type A, type B, and novel H1N1):

Nationwide during week 28, 1,2Â % of patient visits reported through the U.S. Outpatient Influenza-like Illness Surveillance Network (ILINet) were due to influenza-like illness (ILI). This percentage is below the national baseline of 2,4Â %.


On a regional level, the percentage of outpatient visits for ILI ranged from 0,3Â % to 2,1Â %. All 10 regions reported percentages of visits for ILI below their respective region-specific baselines. ILI decreased during week 28 in six of 10 regions compared to week 27.

During week 28, the following influenza activity was reported: 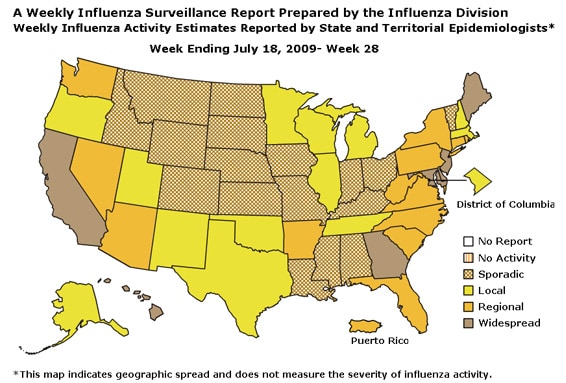